Former Richmond and Western Bulldogs player Nathan Brown has shared his Brownlow Medal predictions ahead of tonight’s count, hinting at a potential two-way tie that goes down to the wire.

“There’s a lot of players that could win it, I reckon there’s at least four but mainly two,” he told Nine’s AFL Sunday Football Show.

In﻿ revealing his Brownlow tracker for this season, ﻿Brown had Melbourne’s Clayton Oliver taking home “Charlie” with 27 votes – one ahead of 2020 winner and Brisbane midfielder, Lachie Neale.

“I’ve got Clayton Oliver winning by a vote, but as you know, that could go either way [with] Lachie Neale a vote behind,” he said.

“But it could be a two-way tie between Oliver and Neale which I wouldn’t be surprised at.

“﻿Oliver might get the three votes in the last game of the season [where Melbourne met Brisbane] so it might come down to that last game.”

﻿Brown then had Carlton’s Patrick Cripps in third after a “slower” second half of the year but conceded Fremantle youngster Andrew Brayshaw had the potential to surprise the favourites.

“I think I’ve been harsh on Brayshaw, like a lot of ones, a lot of twos. He could get a lot of threes and could blow them all away,” he said.

“Miller I thought had a better year last year, but having a good year last year didn’t get the votes, [so] do the umpires then notice him more this year?”. 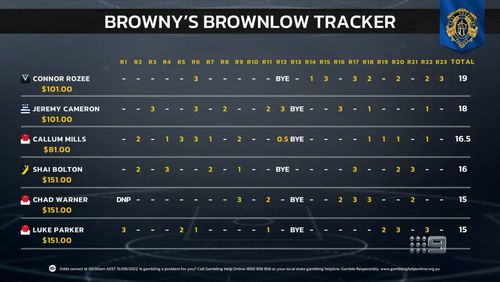 The two-time All Australian ﻿said he saw the count unfolding in a very clear-cut manner, but noted one scenario that could turn the leader board on its head.

“I’ve got three Sydney players in ﻿the top 12 so if one of them poles higher – like a Callum Mills votes more than Parker,” he said.

“I’ve spread it evenly across the Sydney Swans but if one of them attracts more votes then you think, then they could be right up there as well.”

While man wins HIV lawsuit against U.S. military, outdated and discriminatory ban remains for others